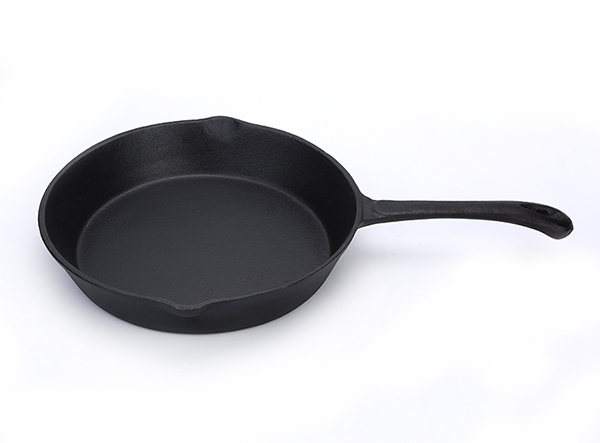 It is a tool with multiple functions in the kitchen. The iron skillet can be used for stir-frying, frying, searing, roasting, stewing, roasting, burning, and even more cooking techniques.

How to judge whether the cast iron frying pan is normal and how to choose a good frying pan?

First of all, we have to check the surface of our cast iron pot. The cast iron pot will appear dark black/dark gray and feel a little rough to the touch. If the plate still has a certain seasoning intact it will be a dark black, smooth touch.

A pot made of iron-carbon alloy with a carbon content of more than 2%. Industrial cast iron generally contains 2% to 4% carbon. Carbon is mostly present in the form of graphite in cast iron, and sometimes in the form of cementite. In addition to carbon, cast iron also contains 1% to 3% silicon, as well as elements such as phosphorus and sulfur.

Cast iron pots have a characteristic. When the temperature of the fire exceeds 200°C, the cast iron pot will control the temperature of the food to 230°C by radiating a certain amount of heat, while the fine iron pot will directly transfer the temperature of the fire to the food. For ordinary families, it is better to use cast iron pots. Because of the advantages of cast iron pot, because it is made of refined iron, there are few impurities, so the heat transfer is relatively uniform, and the pot sticking phenomenon is not easy to occur; due to the good materials, the temperature in the pot can reach higher; the grade is high, the surface is smooth and clean Work well compared with ordinary so-called smoke-free pots and non-stick pots, its unique non-coating design of the pot body fundamentally eliminates the harm of chemical coatings and aluminum products to the human body, and it can be used without destroying the nutrients of the dishes. The whole family enjoys health and deliciousness.