Home >> News >> Cast Iron Smooth Vs Rough: Which Is Better?

Cast Iron Smooth Vs Rough: Which Is Better?

The old and new pans are made from the same materials; they are both casts in the sand. So why the big difference in texture? Primarily, manufacturing methods have changed dramatically from the late 1800s, when cast iron was first made for pans, to the present. Some of the changes have saved money, and some have been made for practical reasons.

Both smooth and polished cast iron can be made into very useful and versatile cast iron pans. There are some heated debates among cast iron enthusiasts about which is better, a polished smooth finish or one with a more textured finish.

We will explain some of the differences between the two types of pans, but we don't think one is better than the other. Both the old cast iron pans and the new cast iron pans have produced millions of delicious dishes. 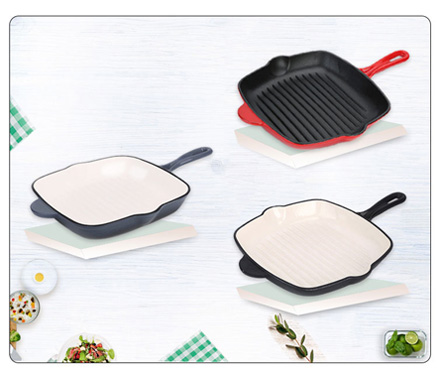 From the late 1800s to the mid-1900s, cast iron was made by hand. Iron and scrap steel was melted and then poured into molds by ironworkers. This hand pouring had a degree of control that allowed for more complex designs, and the resulting pans were several pounds lighter than their modern counterparts.

The resulting pans were then ground or milled with stones. These pans are sold to consumers unseasoned. They have a super-smooth, satin-like surface that looks a bit dark due to the extra light reflection. The entire process of making cast iron pans takes at least 3 days.

The new cast iron cookware is made by machine in about 90 minutes. The iron/steel mixture is melted and poured into a mold made of sand, powdered clay, and water. The cast iron is tumbled through the machine to remove the excess sand from the mold.

Part of the reason these pans are made in such a short time is that the cast iron cookware manufacturer omits the polishing step in the process. These pans are not polished like their predecessors. Eliminating this step helps keep pricing competitive. They have a pebbled, rough surface and are dark gray in color. They are usually pre-seasoned at the factory shortly after they are made. 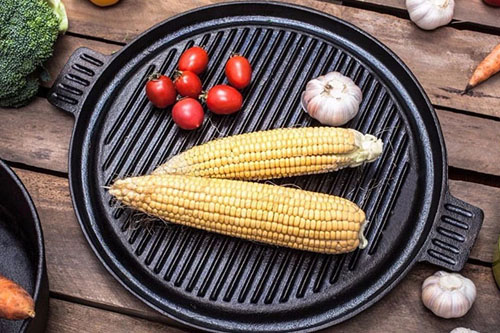 Why did they stop polishing cast iron?

Smooth cast iron did not sell well commercially compared to rough iron. In the 1980s, when smoother iron became available, some cast iron pan manufacturers stopped selling polished iron because they weren't selling enough of it. Without a market to buy it, there was no incentive to manufacture the product.

Your old cast iron may even have started to rough and smooth naturally. Using metal utensils and restoring rusty pans will wear down the surface of the pan over time and create a smoother feel.

Which is better: smooth or rough?

As we mentioned before, this is a topic of debate among cast iron cookware enthusiasts.

Old-fashioned purists will tell you that the smooth surface of a vintage single is the ultimate choice for its nonstick properties. Some say it's more difficult to make good seasoning on a smooth surface because there are fewer tiny dents for the oil to adhere to. Click here for more information on how to polish a cast-iron skillet.

Fans of modern cast iron know that a rough, pebbled surface is easier to season.

While smooth cast iron cookware may require more work to season, both types of pans can be seasoned well. There is no consensus in this debate. It all seems to come down to personal preference. You can see the difference from pan to pan, but it's mostly a result of seasoning. Regardless of texture, poor cooking results usually come from unevenly seasoned cast iron.

For more information about the cast iron skillet sanding, welcome to contact us at +86 131 3117 2753 or write to us at sales@sarchicookware.com. We will be happy to help you out!

Is A Cast Iron Griddle Worth It？

Tips on How to Buy A Cast Iron Skillet