Bare cast iron containers have been used for cooking for centuries. Cast iron pots and pans were used to evaporate salt as early as the Han Dynasty in China (206 B.C. to 220 A.D.). Cast iron cauldrons and cookware were considered kitchen items for their durability and ability to retain heat, thereby improving the quality of the food being cooked.

Before the introduction of the kitchen stove in the mid-19th century, meals were cooked in the hearth or fireplace, and cooking pots and pans were designed for use in the hearth. This meant that all cooking vessels had to be designed to hang over or inside the fireplace. Cast iron pots and cast iron skillets had handles to hang over the fire or had legs to stand in the fireplace. 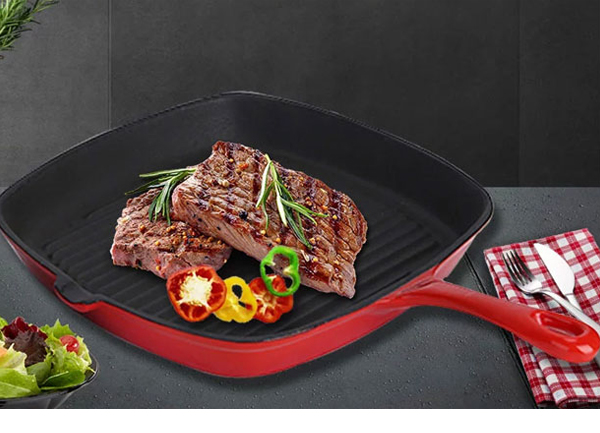 In addition to the Dutch ovens developed at the beginning of the Industrial Revolution, a common cast iron cooking pot called a spider had a handle and three legs for standing in the coals and ashes of the fire. When stoves became popular, legless flat-bottomed cooking pots and pans were designed. this late 19th century period saw the advent of flat cast iron frying pans

Many recipes call for cast iron pans or pots, especially so that the dish can be baked or fried on the stovetop first, then transferred to the oven, pan, and all the food to finish baking. Likewise, cast iron skillets can double as baking pans. Cast iron's ability to withstand and maintain very high cooking temperatures makes it a common choice for searing or frying, and its excellent heat retention makes it ideal for long-cooking stews or braised dishes.

Because cast iron skillets create a "non-stick" surface, they are also a good choice for egg dishes. Other uses for cast iron pans include baking, such as cornbread, cobbler, and cakes.

Cornbread in particular is considered one of the best foods to cook in a cast iron skillet. The cast-iron skillet is preheated in the oven, the ingredients are first mixed and blended in a mixing bowl, then added to the heated pan, and the skillet is then placed directly into the oven for quick baking. Cast iron is a very slow conductor of heat and will create hot spots if heated too quickly or on a smaller burner, however, it has excellent heat retention and the entire pan will eventually get very hot, including one or more iron handles.

I recommend making some delicious chili to go with the cornbread baked in the cast iron skillet.

Why Is a Cast Iron Skillet Better for Cooking?

How to Smooth Cast Iron Skillet？